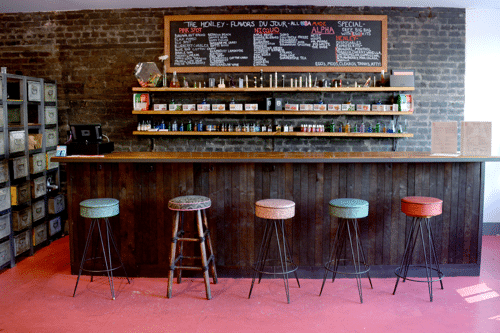 There are a lot of reasons to enjoy the vaping experience, so I’ll keep it brief and list just a few of my favorites. The reasons to start vaping are often completely different from the reasons to continue the practice, and the latter is what I’ve chosen to explain here.

Many believe that vaping is a fad that will soon disappear while people turn back to the old standard cigarettes. I disagree, and as follows are my reasons why. Each person is different and may not find all of these aspects to be true or even pertinent. Regardless, I hope that some of this will resonate or give new users an idea of what continued vaping is like.

The online vaping community has grown so strong and extensive that people like police officers about to go on duty are posting about their hobby becoming an integral part of their day. Personally, I have always tried to have little interaction with on-duty cops, aside from perhaps asking about an ongoing situation in my area or thanking them for their service. However, the expansiveness of the online community not only allows vapers to grow together online but in person as well because it humanizes a group — that is, smokers or vapers — that are all too often either deified or vilified, much like police officers.

It’s pretty common at this point to go out to a vaping store bar or to the smoking break area and find vapers. Talking about vaping with a vaper is as good an icebreaker as borrowing a lighter from a smoker ever was, plus it’s likely a topic of conversation you’ll begin to enjoy. In person you can chat about brands, flavors, styles or a host of other things that are much less productive means of discussion among smokers. It’s such a strong community that reportedly at least one person got a job interview out of it. As someone who both enjoys meeting new people and often flounders for things to talk about outside of polite (albeit boring) discussion of the weather or traffic levels, it’s been a great boon in my life. In fact, there’s a great Ted talk from ad man Rory Sutherland about perspective that starts with a bit about electronic cigarettes and their benefit in public, which I highly recommend.

This is particularly true for anyone who’s currently trying to trade over from the tobacco and fire cigarettes. A pack of smokes can range from five to twelve dollars depending on the brand and tax rate where you’re living. If we assume that the smoker is going through about a pack a day and that they’re going to use an equivalent amount of e-cig per day, then we can make a quick cost comparison. Unless our hypothetical smoker goes hog wild and buys a crazy expensive rig, which isn’t the best idea for a new user anyway, the investment cost is low for e-cigs. A starter set will go something along the lines of $40 and refill cartridges can be found at $10 for five or about $2 each. Each cartridge can last about as long as two packs of smokes, making the pack cost comparison something like $1 with exponential returns the longer you use the starter pack. Ultimately, it’s a no brainer for anyone on a tight budget and looking to cut away some fat.

One of the greater benefits in my mind is the wide range of flavor choices that are available. There are flavors that mimic the traditional cigarettes for the unimaginative and stalwart smokers, but the most exciting thing about e-cigs is the vast range of possibilities. You can get flavors from licorice to strawberry shortcake. It makes the experience of vaping divergent from that of smoking, which I find promising to anyone who’s looking to move beyond simply trying to reproduce the original sensation. My personal favorite is coffee but that’s probably because I like the idea of vaping coffee while I’m drinking coffee — I quite enjoy coffee.

Vapers are a fanatical community in large part because they get the opportunity to control their experience. With traditional cigarettes, the only control that you have is between weaker or stronger filters and branding. This generally leads to a dislike of large tobacco companies — beyond the distaste at the fact that they trade primarily in a scientifically proven deadly product. With e-cigs, there is the ability to control the method of delivery in ways beyond flavor, like the method by which it’s delivered to the vaporization chamber. Vapers can control the vaporization process much more directly which gives a feeling of ownership and in turn loyalty. This is the same effect that you see in a democracy versus a dictatorship: Any group that feels in-control of their governance will be considerably more loyal to their country. This is why congressional approval ratings are at an all-time low but approval ratings for individual congressmen within their districts are relatively reasonable.

I hope in the process of this list that I’ve managed to get across what it is exactly that I enjoy about e-cigarettes. For me, the savings, community, flavor and style customizability that really makes me stay with electronics cigarettes and refuse a return to tobacco.