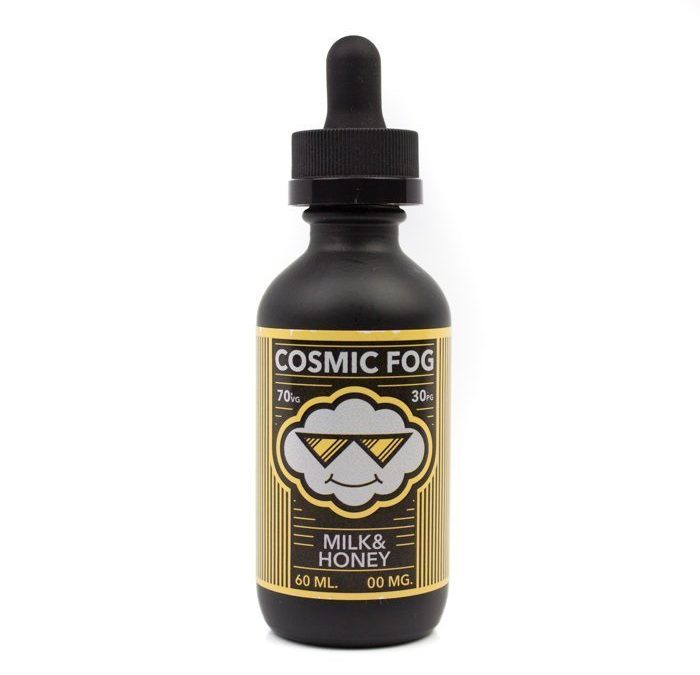 Milk and honey, the thought brings up visions of an eternal paradise. But what does paradise taste like? This creamy concoction from Cosmic Fog Vapors is a favorite of vapers all over the world. Sweet honey and luscious cream make this e-liquid a mouth-watering delight.

E-liquid is a necessity when it comes to vaping. There are tons of brands on the market like Naked 100 Hawaiian POG juice, Mt Baker Vapor Moo juice vape and many more, so choosing one can seem like picking a needle out of a haystack. So, how do you go about choosing flavors? And how do you avoid getting one you won’t like?

Taste is subjective and it depends on how well you know yourself and your taste buds. It also depends on your equipment. Your setup and the wattage can affect flavor as well as cloud production. Plus, everyone’s taste buds are different. We don’t all taste things the same way. The way you choose flavors is my sampling different ones and making notes on what you like about them.

Cosmic Fog Vapors is based out of California and their technicians spend months perfecting each and every e-liquid they manufacture. They do not mass produce tons of different flavors because each one is specially made and goes through a long process to reach perfection. According to information on their website, part of their mission is to create flavors that people won’t get tired of too soon. Ones that have staying power, so to speak. And because of this process each flavor is steeped perfectly and ready to be vaped right out of the box.

This is an incredibly popular flavor so I was interested in reviewing it to see what it tastes like. I really like the company logo on the bottle. The little cloud guy with shades on the bottle looks so chill. When these flavors first came out, Cosmic Fog was the number #1 brand everyone was buying.  It was in fact one of the first premium brands of e-liquid on the market.  I was excited to finally get to try out this juice.

I asked a couple of different people about this flavor prior to this review and they all said they enjoyed it. I knew a couple of ladies who vaped Cosmic Fog e-liquids exclusively and figured I could get their expert opinion of it. They couldn’t really say what they liked best about it. Which was a little confusing to me. I know that this is a favorite and a lot of vapers buy it so there must be something to it. I think it is like when you know the name of something but you just can’t remember it at the moment. Like it is right on the tip of your tongue but yet it still escapes you.

My purchase came in the form of a 60 mil bottle with 6 mg nicotine for $23.95 plus tax. The formulation of this bottle is 70 VG/30PG which is great because I love to use my drippers when tasting juices because the flavors come through so much better than in tanks (in my opinion). Maybe it’s the cotton or the fact that the juice heats up quicker on low resistance coils, but everything tastes better to me in an RDA.

I wasn’t sure what to think of this juice at first because I am not a fan of “cereal” vapes at all. I was hoping it wouldn’t taste like one of those and was pleasantly surprised that it did not. In fact, the flavor is very mild but it definitely has a good throat hit, even for 6 mg which is very low in nicotine so I don’t understand why the throat hit is so strong.

I found this e-liquid in a 60 mil bottle for $23.95 plus tax. This is a fantastic deal for such a large bottle. I wondered if that was a special sale for that site, but I checked around and other retail shops were selling it for the same price for a 60 mil size. They also have smaller bottles but I like this “economy size” bottle because I vape a lot and go through smaller bottles like nothing.

The flavor is sweet, but not sweet like sugary sweet things. I don’t get a milk taste at all, just a very creamy flavor and only a hint of marshmallow. The inhale is the creamy flavor and then you get the honey flavor on the exhale. I barely taste the marshmallow so if I didn’t already know it was a flavor in there I wouldn’t have guessed it. It has a really nice flavor though, now I see why most people say they like it but can’t describe why.

It has a sweet but mild flavor that is perfect as an all-day vape. Not too sweet and it doesn’t make you feel like you need to change flavors after a couple of hours. If you like sweet creamy vapes then you’ll love this one.

The 70VG formulation produces some really good vapor clouds. The vapor is thick and dense. I tried this out at 40W on a .05 ohm coil and the vapor was cool and voluminous. I increased it to 50 and then 60W which is where I hit what I feel like is maximum cloud production without overheating the juice.

Milk and Honey by Cosmic Fog is really good even though the flavors aren’t really pronounced. I didn’t really get a “milky” flavor and the marshmallow is very understated. The one flavor that is prominent is the honey. It is a really nice tasting juice and I would vape it as an all-day vape because it has a good flavor and at a price that can’t be beaten. I will finish this bottle but probably would not buy it again just because I have more flavors to try out. This would be perfect for someone who prefers a mild, slightly sweet vape that lasts all day. It works well in a tank for those who prefer to fill up instead of drip.

When it comes to choosing e-liquids taste is subjective. What one person loves another might hate. Choose flavors that appeal to you or that you like already (desserts, bakery items, and etc.) for a closely-matched flavor profile. You can also go “outside the box” and try some completely new flavors as well, just be prepared for the fact that you might not like certain flavors. The fun is in the tasting and experimentation.